I woke up traveling somewhere between Quebec and New Brunswick on our speeding Green train. A perfect metaphor for the morning’s informal discussion: what are the ways in which Quebec Greens differ from Greens from the rest of Canada. And in asking this to our Quebec Greens, like the train between borders – would I cross the line?

I told them how our MPP Bill Walker had explained to me once that we could not become dependent on cheaper power from Quebec because they might separate. I was pleased to hear les Verts (Quebec Greens) scoff at the idea. Although, they did go on to inform me that their Provincial Legislature is called the “National Assembly”. And that the sign on entry to Quebec says “Welcome to our Nation’s Capital”. Pretty sure this would make Bill nervous.

I learned that rising electricity bills were not a campaign issue in Quebec. This made me jealous. We were fully blamed for the Liberal’s “green” energy act and therefore blamed for how badly the wind turbines were implemented. In Quebec, no one complains about electricity costs or wind turbines! It’s hard to imagine how easy it must be to be green in Quebec!

Apparently it is because the people still own Hydro Quebec. And it was not the BGOS Greens’ idea to privatized Hydro One yet we get blamed for its profit making. Quebec also does not get into the expensive nuclear power refurbishment. This was not our idea either but the rising cost of energy is still all our fault!

Les Verts asked if the Bruce nuclear waste was being stored near water sources. I tried to be calm: not really, well sort of yes, we are going to bury it next to Lake Huron. They were shocked and dismayed. Now it was my turn to scoff, “we know what we’re doing, it will be buried in granite – as in countertops – the waste would be surrounded by really hard granite countertops!” Suddenly, I felt the need to defend  all the decisions made in our riding – forget about Green policy!

Then they told me about how all the Quebec Green riding EDAs meet regularly to help each other out,  strategize, talk about who to target as voters. It’s called the “Aile Quebequoise du Parti Vert du Canada”. “Aille” apparently means “wing”. I told them that we want to know the other EDAs but we’re too busy counting all the donation checks that keep flying in – like money with wings! Was that peevish?

Forgive my failings in this conversation. It was my first time overnight in a train, sleeping upright in a chair. I did rather well up until I started talking. Les Verts are a thoughtful, intelligent bunch. They were like the serene lake we woke up to, reflecting a bright open sky of hope. And I am feeling a little more like the fog that hung on that lake. A little puffy. And grey.

Worry not, we are in Fredericton now, and tomorrow we start the 2014 Green convention officially. It will be a bright new day – I will be sleeping in a real bed tonight. A dorm room in the University of Fredericton. What could go wrong? 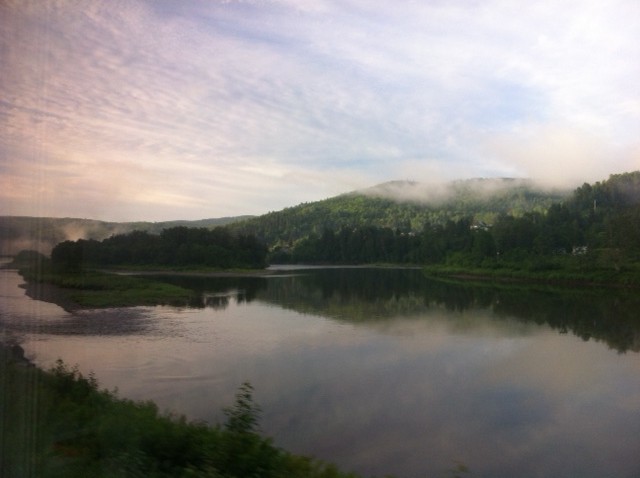