Day 3 (July 19th)
One hundred and seventy-five members have gathered to tackle policy issues here in Fredericton. We have been given two coloured cards with our names on them: red for a voting against a proposal and green for supporting it. These cards will mostly come into play tomorrow when we break into smaller groups to discuss specific issues laid out in the agenda. One of the first votes tonight is to accept the agenda as described in a 143 page document. The vote goes well: “consensus” means we have all voted yes to proceed tomorrow as planned.

Tonight is about introductions. I am sitting at a dining table with formal dinner settings surrounded by perfect strangers. Kevin is from Victoria. He worked as a environmental policy advisor for NATO. Cheryl works for an animal rights group and is from Nova Scotia. Trey is a an ex-petroleum engineer from Edmonton. Reint is from New Brunswick, a dairy farmer who has come as an observer with intentions to challenge a policy the next day that would bust up the milk quota system. I too am an observer of sorts.

I can report that I have never attended a convention as a delegate before. I have worked them for many years as a corporate entertainer. Travelled the world to entertain mainly sales forces at conventions in Puerto Rico, Palm Springs even Beijing, to name a very few. I can safely guess that none of the conversations around the dining tables were ever as intense as those at a this convention so far. At least, I have rarely witnessed such energetic intensity between strangers.

As to the guest speaker, Brenda Sayers from the Hupacasath First Nation, she too delivered a speech that was nothing like the motivational speakers of my day. She came with cold hard facts: the Canadian China free trade agreement will put an end to the country as we know it.

Here’s a summation: “On September 9, 2012, Canada signed a Foreign Investment Promotion and Protection Agreement (FIPA) with China. FIPAs are Canada’s name for bilateral investment treaties, which are used by corporations globally to challenge public policies or community decisions that interfere with their profits.” (http://canadians.org/fipa)

It was designed in secret, will last 31 years, and can be ratified without a vote being put to parliament. It means if a town council tried to save a natural resource or have a certain chemical removed from a product to protect its citizens, it could be taken to court for interfering with business.

And that was how the evening finished. This is unlike any wrap up of the corporate convention kick-off I ever witnessed. Most of those had ear-drum-busting music, laser lights and confetti as the executive strode off pumping the air with their fists. Brenda Sayers, a first nation activist, very quietly thanked us for listening. Elizabeth charged to the stage to remind us that she personally called every premier in Canada and no-one responded. That we were looking at the only person who is standing between us and Harper with China. Brenda is taking the government to court, by the way. And could use some financial help, if you have need for an excellent place to dump your excess cash, she could help you.

The details of this trade deal with China, to put it mildly, are a little disheartening. There are few other people who have had a professional career as a comedian in this crowd, I’m guessing. But when our collective souls hit the ground there is nothing like the cleansing spirit of the paid clown. But even I was too crushed to joke about it. Even now.

The upside, the Greens are not giving up. Brenda will not give up. And I will not give up trying to lend my skills as communicator, funny or not – in this case, not! So tomorrow, undaunted, I will report on the milk farmer’s case as he presents it to the Greens. Surely there will be something funny about supply management! I’m crossing my milking fingers! 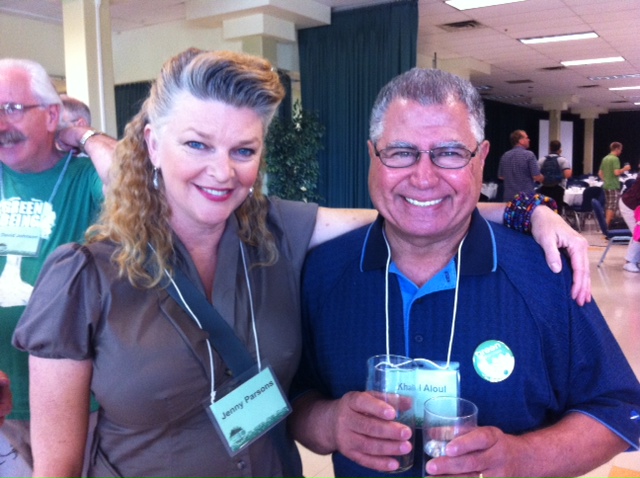