Learn about the importance of pollinators, their decline and how you can create habitat using native plants to make a big difference! Presentation by Carol Dunk, past President of The Ontario Horticultural Association. 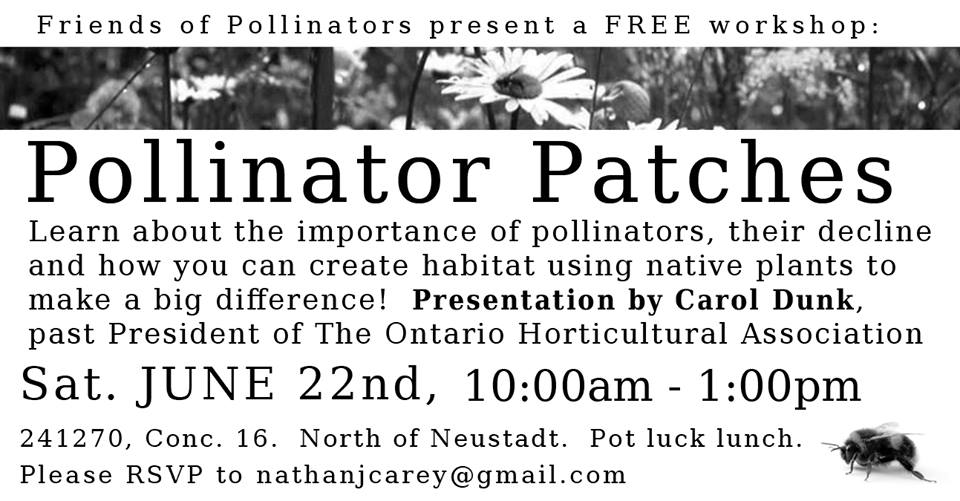 Grey-Bruce Peace and Justice Coalition, B.G.O.S. Greens, the Liberals and the New Democratic Party spent the last 6 months planning and organizing a Democracy Forum and World Cafe .  This event took place on April the 30th with keynote speaker Dr. Peter Russell and it was well attended and a great success.  Fellow organizer and Green, Lynn Morgan, would like to share her notes and experience with all.

‘A recent poll conducted asked people who vote, “How the Prime Minister in Canada was elected?” For the most part, people who voted were under the mistaken impression that they elect the Prime Minister directly…much like the US. This is just one example of the lack of knowledge of our current electoral system, our antiquated and mis-representational, First Past the Post system and one of our biggest, most cumbersome barriers to a healthy democracy in Canada.

The second greatest scourge of the democratic process in Canada is in relation to the specific Party promotion. There is such a strong manufactured advertised ‘Party’ image, that candidates are no longer free to represent their regional ridings. Dr. Russell related examples of instances of ‘punishment’ for those MPs who would stand and vote against the will of their Party Leader. The ‘Party Whip,’ as Dr. Russell noted, has become synonymous with strict, even militaristic discipline within the Party. No longer do we have independent MPs who happen to be members of a specific political party with a ‘freedom of choice’ in matters of how they vote and represent their constituents. We have members of the managed and oppressed team playing under Party colours. This ‘team’ is subjected to the will of the Leader and the Whip, enforces the discipline and the will. Little room remains for compromise. MPs outside of the party are now viewed as ‘enemies’ rather than as ‘opponents.’  This ‘enemy to opponent’ shift has made the democratic function and formerly congenial working atmosphere of debate in the House unreasonable, resistant to cooperation and dictatorial. No longer are constituents and their concerns represented in the House; the MPs have become puppets of the Leader of the Party…Parties which are consistently under the influence, and some would say under the growing control of powerful lobby groups and corporate interests.

Many changes have gradually taken place in the actual system of Parliament since about the mid 1960’s. Power has become more and more concentrated in the Prime Minister’s Office – the Office of the PMO, with an annual 10 million dollar budget. ‘The Boys in Short Pants’ as they are described on the Hill, are hand-selected ‘elite’ employees of the PMO’s office. No accountability exists for the budget, no transparency exists on the hiring process (who are these people?) nor is there any clarity on what specific authority these particular persons have (but apparently it is immense and fear-inducing to the MPs in the House).  No one really knows what goes on in that office and as taxpayers, we pay for an unaccountable, undefined and unrecorded office overhead and expenses, with un-elected personnel and their mysterious authority, power and unknown purpose – all unknowns. Dr. Russell indicated that this office is ‘undefined’ and as Canadian we should be absolutely outraged and demand some accountablity!

Dr. Russell proposed that the only sure way forward for the health and the healing of our democracy in Canada is with electoral change in the form of some variant of proportional representation. He encouraged each of us to vote for parties that would support electoral change and to educate ourselves on the various models of proportional representation. Dr. Russell stated we should participate and, ‘hold your nose if you have to’ but get in there and join a political party, join in the conversation and get involved. If we want to save Canada, we have to make it a priority to lend a hand and a voice!

From the World Cafe:

Along with many expressions of frustration with the Parties lack of co-operation, the most common theme at many of the tables, was also the theme of the political system no longer representing the voices of the people that vote. ‘I have never in my life voted for the Party that was successful in an election; I wonder why I continue to vote?’ Several people expressed that they felt one Party was just like another and it made no difference which one you chose, because the representatives ‘would just do as they wanted’ once they were elected. Where is the accountability? Where are the values?

Education of the general voting age public, but also of the youth, was noted as a way to potentially address and solve the issue of voter apathy. As Dr. Russell mentioned statistically in Canada voter participation is at an all-time low. How do we get people out to change the system that doesn’t currently represent them? Well that’s the conundrum! One loud suggestion from another table was that there be a monetary fine for lack of participation. Perhaps that could be a partial solution. People would be forced to attend and vote at a station, but would ‘forcing’ them to participate really force them to care or to become involved, one could wonder?

Co-operation between Parties seemed to garner the most positive response. Why can’t people get past their political party affiliations and work for the betterment of the people, the region and the country? As Dr. Russell noted, the Party apparatus is broken currently. The Leaders are all concerned with getting a majority so that they can push forward their private agendas. Those personal/corporate agendas aren’t necessarily inclusive of the Canadian citizenry’s voices nor are these agendas in the best interests of all of the peoples of Canada, the environment or Canada’s participation as a member of the global population. More work has to be done on the discussions around how to make change in a system that has become so corrupted, on so many levels, that it is accountable only one person in the entire country and that is the Leader of the currently reigning majority party.